This last May we spent eight days in Scotland. Kim and I like architecture so we zigzagged our way through the country seeing different castles, estates, gardens and homes. We had a great time.

One of the best aspects of the trip was the food. With that said we thought we would share some of the highlights. The only thing these dishes had in common was they were all very good. As you will see some were unique and some were simple. If you are interested in seeing the rest of the dishes we enjoyed, be sure to check out the photo album on Facebook.


First we are starting off in the town of Broadford on the Isle of Skye. The restaurant is called Claymore. We found this place out of almost desperation. After a long day of driving and sightseeing we were getting to the point where we just needed to eat. For miles nothing along the road looked good. Finally we just stopped here, as the only thing we cared about was they were still open. It turns out this was our favorite dinner of the trip.

Kim started out with Smoked Salmon Chowder that was to die for. We are both big New England Clam Chowder fans but this took it to a whole new level. The soup was thick, with big chunks of potato along with the perfect amount of smoked salmon. It was seasoned to perfection. This could have easily been a meal on it’s own but I am glad we did not stop there.

Friends and fans of Saturday Night Foodies suggested that we try Haggis while we were in Scotland. I think most people said it as a joke. The reason is Haggis is a dish of sheep’s “stuff”. Basically it is the heart, liver and other stuff from the inside of a sheep minced with spices, onion, and oatmeal. Considering that is was a fan suggestion, I figured I could try it out. Worst case I had one bite and that was the end of it. Well I ordered Claymore’s Haggis, Neeps and Tatties (yellow turnips and mashed potatoes) with a creamy whisky sauce. This was actually an amazing dish. Once you get past what you were actually eating this became one the best dishes I had on our trip. I am told it is similar at other restaurants but I am not so sure. Very nice dish! 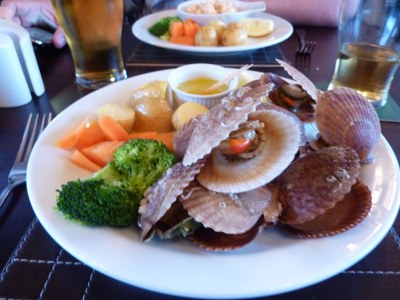 Once again those were “starters”. Kim and I both ordered main courses. She got the Queen Scallops that were grilled in their shells with lemon butter. This is how scallops should be served. A scallop is very similar to a clam or mussel. For some reason in the states we only use a piece of the scallop. I need to research why. These were the whole thing and they were super tasty and had a very nice texture.

I ordered the Squat Lobster in garlic butter sauce. From what I could tell these would be very similar to crawfish. Nice thing was they were shelled and sautéed scampi style. Overall a good dish but not as impressive as everything else we had. If you find yourself on the Isle of Skye, check this place out for dinner. Well worth it!

The best fish and chips we had on this trip was at the hotel we stayed at in Melrose. One thing I like about Scotland is they actually have tartar sauce. This restaurant takes their tartar sauce seriously! On top of that the fish was fried to perfection. The fish was haddock, which is a very nice fish for frying. It was meaty yet tender. Very simple but well executed dish.

Near the end of our trip we visited the Lake District in England. This evening I had their roast beef with gravy and Yorkshire pudding. This again was a simple dish. The roast beef was sliced about an eighth of an inch thick. Yorkshire pudding is fried batter that usually comes with roast beef and covered with gravy. This was good as well. The gravy itself was simple but flavorful.


As you can see we had a lot of wonderful food and this was just a sample. Don’t forget to check out the rest of the photos on Facebook.