Thanks to the people at Bootlegger’s Brewery we did not have to drive far to check out another LA gourmet food truck. In a pervious article we talked about how breweries are teaming up with food trucks make the perfect dinner out. I am still very much liking this new trend (or I hope it becomes more of a trend).

Vizzi Truck is a very fun food truck that is usually in the LA area. They are known for mixing cooking styles from California, Oregon and the Philippines. However it does not stop there. From what we could tell they take big flavors very seriously! The truck itself is also worth mentioning because it is a touch different. It has a couple of big 32″ TVs, big speakers, and a screen showcases photos of their awesome food. It was very cool to walk up to a food truck and watch the Laker game while we figured out what we wanted to eat. 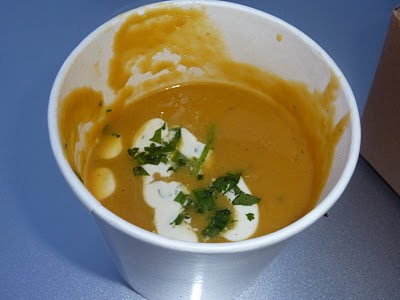 Their menu had a nice selection and as always we had to try a few things. First off was their soup of pan roasted butternut squash. This is a weakness of mine! I usually have to try butternut squash soup if i see it on the menu. This version was very good. It was a bit different than the one I make which was an added bonus. It may be because they also have carrots and maple sugar in theirs. You can also taste the cumin and chilies. The dolup of cream on top was a nice touch. I made need to add that to my recipe.

Then it was onto their Black Skillet Jidori chicken sliders. These were not too fancy but very good. First off, the way they were served was unique. Their sliders come laid out on top of a bunch of pimento spiced-yakima salt popcorn. Not only did it look great it was a very tasty garnish. Bonus! The chicken is garlic marinated but the garlic was not overpowering at all. The sliders were topped with some chimichurri sauce and served on a grilled hawaiian role. 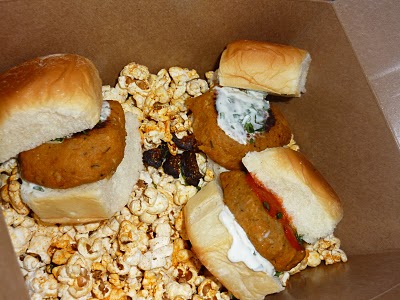 Now the star of this show. Last we had their organic chickpea sliders. WOW! This is a formed vegetarian cutlet served on hawaiian role with a creme-fraiche chimichurri sauce. It also came with popcorn. These were amazing. They are very good as come but if you want to add a little flare make sure you try one with the sriracha sauce that they have available. Gives it a nice heat that I think makes them almost perfect.


I also want to mention the gentleman that helped us in the truck was very friendly! It is amazing how much nicer the experience is when the people you talk to look and act like they are happy to be there and are proud of what they do. These guys should be proud!  I highly recommend the @vizzitruck!


Once again this was at Bootlegger’s Brewery so you have to grab something while you are there if not just stop in for their beer. This time I ordered a Blackberry sour. I wanted something a little different and this was perfect for that. You could taste the blackberry but it was not too much and the sourness was perfect. I have not had anything like that before but I will try that again. I would guess they have about twenty beers on tap right now so you should stop in if you are into beer.


Sometimes people give me a hard time because I have not had much bad stuff to say about anyone. This is another food adventure where it was right on the money. Maybe that is why we are having so much fun checking out all of these trucks and restaurants and sharing what we find with you!