Last Saturday was a good food adventure day. We started out by going to Charlie’s Chili in Newport Beach for breakfast. Then it was watching all of our Twitter & Facebook peeps talking about visiting the 15 gourmet food trucks that were at the California Democratic Convention at LA Live. Unfortunately we were not able to make it to that event. To be honest we thought it would be a nightmare. Turns out we were wrong. We enjoyed all of the tweets about the great food.

As you would expect we were a bit jealous. I spent some time combing through Twitter and the Mobile Cravings website to find if there was be chance any nearby trucks that we could go check out. Turns out that there were two “LA” trucks making their way down to the OC. 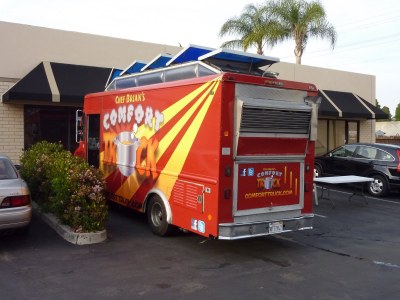 First was the Comfort Truck, which was being hosted by Bootleggers Brew. The Comfort Truck is a truck that is based in LA and one of the many trucks that are on my list to check out. This is an older truck that looks to have been refurbished and it has what looks to be a very expensive paint job. You cannot miss it going down the street. The have a small menu as most trucks do but the focus here is on good comfort food. I have to say they nailed that! 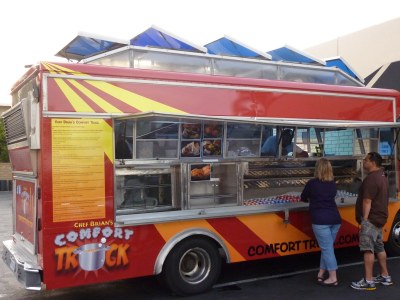 They offer a variety of sliders, mostly chicken that I thought was very cool. They also had a corn salsa with seasoned flour tortilla chips they call “Crack”. That was a good name for them! We tasted three different sliders and the “crack”. Their main attraction is the Golden Fried Chicken Slider that was just killer. This one is a boneless breast that is marinated then fried. It is served with a roasted garlic aioli that is the perfect compliment. You have to get this one for sure. We also had the Sautéed Spicy Chicken Slider and the Jerk Beef Slider. These were both spot on as well. We were both super happy with the food. 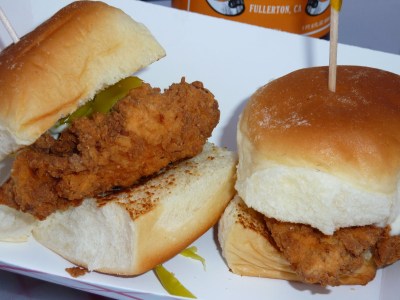 The only downside was they were not as friendly as I am used to when visiting a gourmet food truck. Not rude or anything but just a little off. Now on the other hand they have been very friendly on Twitter. So I do not think this was normal for them. When is all said and done you have to check these guys out! I know we will be visiting them again soon. 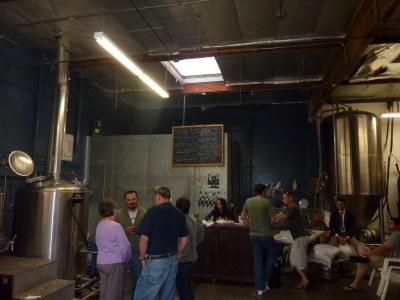 In addition to great food we were at Bootlegger’s Brewery, which we had never heard of before. There were a lot of people hanging out which was nice to see. We tried a couple of their beers and they were very good as well. It was very interesting to see what looks like a growing trend where breweries invite in gourmet food trucks and together leveraging social media bring a crowd together. I think it is a very good idea. One offers good food that can be changed on a weekly basis and the other offers good booze. That is a winning combination. I am hoping to see more of this in the future. After talking to the owner at Bootleggers it seems it was working out well. They have had a number of different trucks from the OC and LA.

The second stop that night was @FrySmith which was at a different brewery call The Bruery. How is that, two breweries in Orange County bringing in inviting gourmet food trucks from LA. This stop we did not try the beer, sorry @TheBruery. We will check them out next time. They had a good crowd as well so I am sure it was good. FrySmith has one of the coolest trucks I have seen. The funny part is when we got there it looked like an old funky truck from a distance. I was so wrong! Big windows so you can see what is going on. There is a lot of cooking area and along with lots of stainless steel. It looks like it is a converted truck of some sort. It was fun to watch them work. 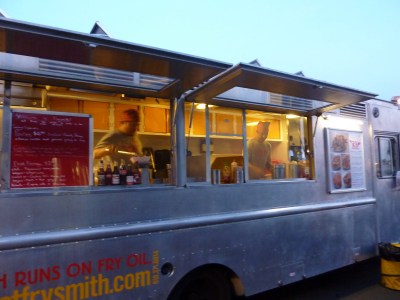 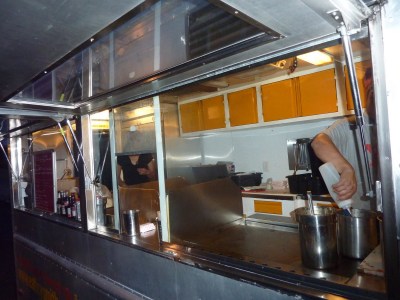 We ordered their Chicken Sweet Potato and their special, which was a Poutine. The Poutine has Ballard Family Farms cheese curds and porcini gravy on fries. This was awesome. The cheese curds had a wonderful texture and flavor. They were generous with the curds, gravy and fries. The porcini gravy had a great mushroom flavor and pulled the whole th
ing together. We both liked this one a lot.

Neither of us are huge sweet potato fries fans but the Chicken Sweet Potato fries are their most popular item. The chicken is done with a tomatillo- tamarind sauce and topped with shredded cheese and chopped cashews. We were split on the chicken, I really liked it by itself but Kim was not so sure. I think it has to do with the odd combination. When you see the nuts with the shredded chicken you almost think you are going to have a more Thai influenced flavor and that was not the case. The one thing that seemed different to me on this dish was the fact that there was no sauce so the flavors did not seem to blend well together. So the jury is still out on this one. Many people rave about this combination. The sweet potato fries may have been our downfall. 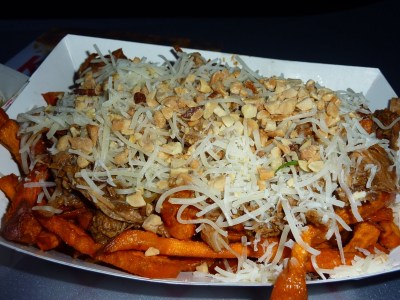 They also have cookies on special. This night they had two different ones. First was the Chili Chocolate with chocolate chunks and pecans. The cookie was soft and chewy with big chocolate chunks. The chili was a very nice touch. It kind of hits you after the fact. Not hot but you know it is there.

The second cookie was the Cherry Chunk with chocolate chunks. This was perfect as well. It was soft and chewy with lots of cherries. Both cookies were awesome. You have to be sure to get to them early, as they seem to sell out fast! 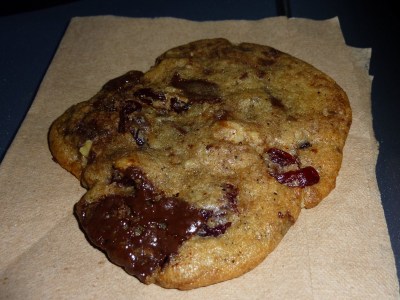 Overall the @FrySmith was good. We will go back. However I am a little concerned about how often they will have repeat customers. They have a pretty small menu. The menu has big flavors and I am looking forward to checking out their Kim chi fries. I am sure they will do well but in the long run it would be nice to see a little more. I am only saying this because it was a fun truck; they were very friendly both in person and on Twitter. Besides they do good work. I want to see them around for a long time!

It turned out to be a good night. I am really liking what I hope is a growing trend. Libations and road food, who can ask for more.

2 thoughts on “Pub Crawl or is it a Gourmet Truck Crawl? – Comfort Truck, FrySmith, Bootleggers Brewery & The Bruery”