Kim and I had a very hard time figuring out what this weekends food adventure would be.  We narrowed it down to two choices, to check out two food trucks at the Santiago Art Walk in Santa Ana, CA or head over to Paul’s Coffee Shop, a new Diners, Drive-ins, and Dives (DDD) joint in Fountain Valley, CA.  The DDD has not aired yet so that was extra appealing.  On the other hand it sounded super appealing to be able to check out two food trucks in one stop.

We decided to head over to Paul’s Coffee Shop.  However when we got there we found that they were closed.  Not out of business closed but closed for the day.  They are only open until 2 pm Monday – Sunday.  Yep, I should have guessed that when the name has “coffee shop” in it but I was just too excited.

Thanks to my trustee iPhone, not all was lost.  We looked up the information about the Santiago Art Walk on Twitter and shot straight over.  We first stopped at @piaggioonwheels. As you would expect it was a very clean truck and the people were really nice.  I believe they are known for their empanadas but that was not all that they had.  We went a little crazy and ordered about five different items.  Heck, we need to make sure the food is good before we send you there!

We ordered three different empanadas (Chicken, Caprese, and Spinach with Feta).  One of them (Spinach with Feta) was not even on the menu for the night. The empanadas were fried perfectly and they came with chimichurri sauce, which added a good flavor.  The spinach with feta was my favorite but the chicken was a close second. 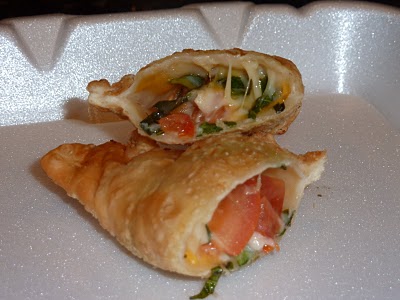 Caprese Empanada (Tomato, Fresh Mozzarella, and Basil)
We also ordered their Portabello mushroom quesadilla and pork sliders.  The quesadilla was super good.  It had a well-balanced flavor, a meaty texture and came with a tasty sauce a chipotle mayonnaise that added a smoky depth to the quesadilla.  Finally, the pork sliders which were on King’s Hawaiian rolls with a little chimichurri sauce. The pork had great flavor.  Overall, we were very impressed.  We will track these guys down again. 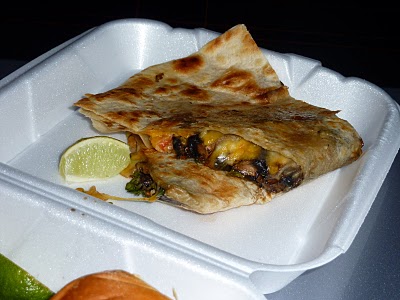 While we were waiting for the Argentinean food to cook I ran over to the @Brooklyn_Boys truck.  Once again, a very clean truck and as soon as you see it you know what they do.  Meat! It took me forever to figure out which of the sandwiches I was going to get because their menu is so extensive, there was too much to choose from.  I believe their Rueben is their most popular one.  We ordered one of their specials, Mom’s Brisket Dip.  This is their regular Mom’s Sunday Brisket but dipped halfway into Au Jus. 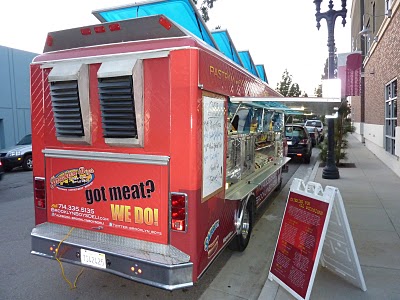 While I was contemplating my order, Kim tried the Matzo Ball soup.  This was the first time that Kim or I have had Matzo Ball soup.  We were both pleasantly surprised at how good it was.  It had an earthy flavor, the Matzo Balls were tender and there were good-sized chunks of chicken.  I think we will have to try that at more places.

Matzo Ball Soup
Now back to the star of this show, the brisket dip.  I was a little worried about trying this.  For years I have heard people talk about how tender brisket is and how much they love it.  But I will tell you the times I have tried it I have always been disappointed.  I have never experienced brisket the way people talk about it, until now.  This brisket was INCREDIBLE!  Super tender and it melts in your mouth.  This was by far the best brisket I have ever had.  I mean it was truly unreal!  The bread it was on was good too.  The sandwich came with potato salad, cole slaw and a pickle.  The pickle was good; the other sides did not do much for me.  It was very clear that the meat was their specialty.  To tell you the truth that is fine by me!